Freedom of Media at gunpoint: attacks on media in Myanmar

"Freedom of the press is a precious privilege that no country can forgo", Mahatma Gandhi.

After the Military government seized power on February 1st, 2021, the future of Myanmar's media and citizens have faded out along with the country's prosperous future and civilians' rights to information. Before the democratic reform in 2010, Myanmar was one of the strictest censorship regimes and the military government's current attempt to take control of vital information and communication channels is pointing out that the junta is trying to reverse to that era. To protect the already blossomed media environment with dozens of news outlets and news industry organizations, the journalists and independent media outlets are vowing to press.

Our rights to information are violated!

In this digital era, there is no place for dictatorship in this world. Thus, to gain control of the country without any interference, a take- over of mainstream media would not be enough for Myanmar's military government. The junta cut off access to the internet and telecommunications but after two- day blackout at the start of the coup d'etat, internet access was restored. Except for the military-controlled television channels, several free-to-air television channels are no longer on air. A draft of the Cyber Security Law was announced on February 6th, 2021 which without a doubt violates a series of human rights.

Myanmar citizens are still enduring night internet shutdowns from 1 pm to 9 pm and since March 15th, 2021, the mobile internet services have been blocked without a reason but broadband services remain available. Social media platforms such as Facebook, Twitter, and Instagram have been banned since February 4th, 2021 and that causes a 7,200% increase in local demands for VPNs. The military government tried to ban some of those VPN services but they couldn't cover the whole batch.

To control media coverage on the coup, a total of 40 local and foreign journalists have been detained. The repression of the junta on the media is on the rise even though the junta approach to media is quite soft at the initial. Some of the journalists remain in custody without any charges but most of the detained local journalists from independent media outlets have been charged under Section 505(a) of the Penal Code which was recently introduced by the junta last February 14. According to section 505(a) of the Penal Code, a person shouldn't cause fear, spread fake news, agitate directly or indirectly criminal against a Government employee. It also carries a potential prison term of 3 years.

On February 20th, 2021, a Japanese freelance journalist, Mr. Yuki Kitamuzi, was detained by the police for less than 24 hours, the first international journalist to be detained by the junta since the coup. Even though he was released on the same day, the Polish freelance journalist from Germany's DPA news agency Mr. Robert Bociago, the second foreign journalist to be detained by the military, was beaten and detained in Taunggyi and his whereabouts were unknown for the last two weeks. After two weeks under arrest, he urged the international community to take action against the military coup as this crisis could elevate into a regional crisis.

Civilian journalism on the rise

The military government aware of the danger of words as they try to consolidate its power. They are targeting journalists with violence and lawsuits and in some events, live ammunitions. To report news, journalists tend to pretend as protestors or civilians and Facebook has become the main platform to share information with the people. The truth that Facebook has become the major source of information has both pros and cons to this military coup. As the information on Facebook is not accountable, the dissemination of misinformation and disinformation would inevitably be massive. Through Facebook, the military is trying to manipulate information but fortunately, with political awareness, people are more aware of these propaganda acts.

Facebook may not be a good social media platform to find real facts but civilians can check genuine news and facts through fact-checking Facebook pages and websites such as AFP Fact-Check မြန်မာ, Update Information Myanmar (UIM), Mratt’s Channel, and EDM 017 Network which has their respective public and private Telegram Channels by dint of Telegram’s secured features.

As it has become difficult for media to cover the whole country, the role of civilian journalists from the more tech-savvy population in keeping the world's attention on the current crisis of Myanmar has become crucial. As civilian journalism or street journalism can be done by normal civilians, it is more convenient and time-saving to report, disseminate, collect, and analyze information. Myanmar society now relies upon civilian journalists to let the world know about what's happening in Myanmar. 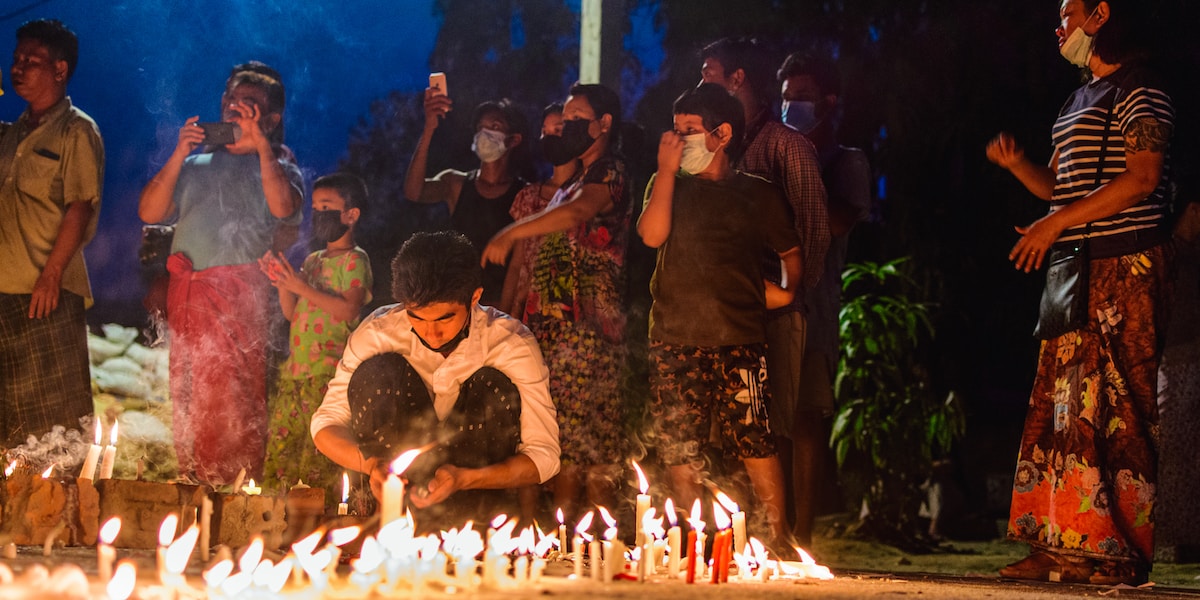 The vague future of Myanmar's media

The blossoming future of Myanmar's media died along with the coup but against the restrictions on the media by the junta, the journalists are risking their lives to deliver the right news to the people.

On February 23th, 2021, the military government announced that the independent media outlets will lose their publishing licenses for referring to the military "regime" or "junta". On March 14, 2021, the licenses of five local independent media outlets named DVB, Mizzima News, Khit Thit Media, Myanmar Now, and 7 Day News has been canceled and the junta didn't allow these media to broadcast or provide any information to the people. The military also raided the offices of Mizzima News, Kamayut Media, and Myanmar Now after their licenses were banned and the co-founder and editor-in-chief of Kamayut Media have been detained since then. Only state-controlled television channels and newspaper which spread misinformation and disinformation are still alive.

There is no doubt that the right information which is a fundamental human right will be a serious concern in Myanmar in the future. Without Media Freedom, a pillar of vital democracy, the country will return to the dark age under the control of the junta. The future of the country depends largely on Media Freedom and the fact that Myanmar people could improve their digital literacy during this coup is said to be the silver lining. But, in less than 2 months, Myanmar’s media freedom hits rock bottom and the military government is expected to do more repression.

There are possibilities that civilians’ rights to information and the remaining media’s freedom could vanish in the coming months. Even though civilian journalism is suddenly blossoming to certain points, broadband internet connections are meant to cut off in the meantime. This is the time that everyone should speak out by any means about the Junta’s violations on media freedom as our voice matters.